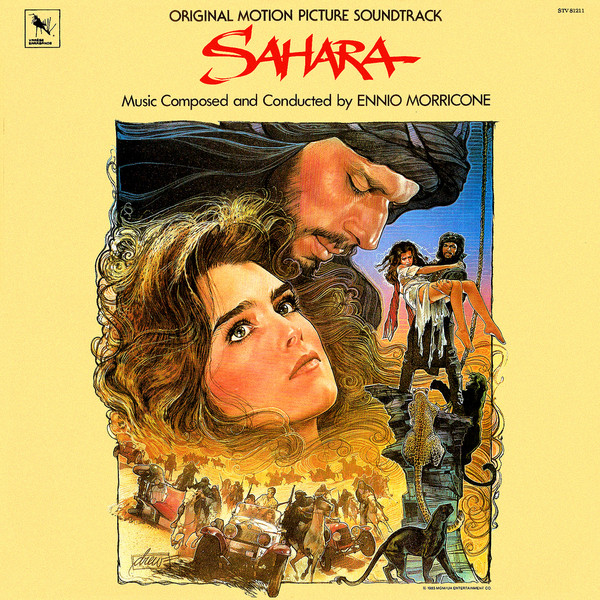 Other information. Total number of members who have this title in their: Collection: Wish list: 10 There are 9 labels for this title. There is 1 compilation album for this title. Image supplied by s. Intrada MAF D. Track listing 1. Theme from Sahara Fathers Death Arabia On Your Marks Get Set Go Armour Car Oasis Desert Music Waterfall Kiss Panther Chase More Desert Music Car Trouble End Titles.

On Your Marks. Get Set Memories Of Father. Welcome Blue-Eye. Car Trouble. Wounded Men. Ride To Oasis Love Theme. Waterfall Kiss. You Are To Be Wed. Beetle Torture. It opens with the end credits - titled "On Earth as it is in Heaven" - and instantly we're into classic territory, a piece of music whose absence from any list of the finest film music would render that list completely irrelevant.

It's a religious film, and Morricone is a religious man, and I'll say one thing for the Christians - they have inspired some extraordinary music over the centuries. The mixture here of heavenly choral chanting, subtle tribal percussion and the film's exquisite main theme on The Waterfall - Ennio Morricone - Sahara is enough to make anyone fall to their knees and praise the Lord - I don't know how many hundreds of times I've listened to these three minutes and forty-eight seconds of musical bliss, but one thing I do know is that even after a few thousand The Waterfall - Ennio Morricone - Saharait won't be enough.

Had it been composed two hundred years earlier, I'm sure it would be a classical staple. Conventional wisdom would suggest that there is considerable danger in putting such a piece at the start of the album - surely nothing could ever live up to it.

Not The Waterfall - Ennio Morricone - Sahara this case - "Falls" follows and is For Your Precious Love - Geater Davis - Lost Soul of The Waterfall - Ennio Morricone - Sahara most blissful, soaring, inspiring film themes you'll ever hear - pan flutes and then the full orchestra play the most sensational of melodies, and while it's not hard to imagine a composer being inspired by the sensational image of the waterfalls which inspire the piece, it's hard to imagine how anyone could have been more inspired than this.

The Mission main theme. From The Mission soundtrack by Ennio Morricone. Retrieved 9 December British Board of Film Classification. Archived from the original on 20 October Miles Davis - Agharta 19 October The Sunday Times Digital Archive.